How do inductive sensors work? A look into their technical inner life and their evolution over the last decennia with Sorin Fericean 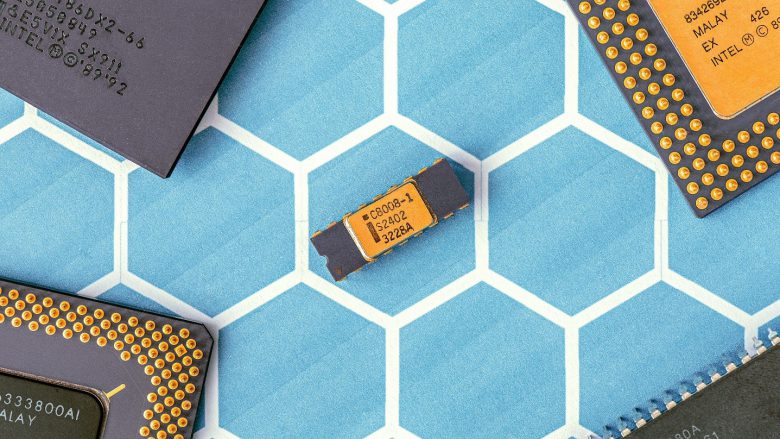 Sorin Fericean’s book is titled Inductive Sensors for Industrial Applications and primarily deals with sensors containing inductive primary sensing elements, and that is because the “Inductive” is one of most widely used in the market and also due to the fact that the author acted mainly in the R & D, manufacturing and tests and marketing fields for inductive sensors for more than 25 years [1].

However, it is absolutely necessary to underline the universality of this technical reference book. The volume implicitly addresses all sensors experts having industrial sensor preoccupations, either through industrial applications or due to the activity in sensor design and validation, manufacturing and tests, sales and marketing, etc., at different levels.

The Artech House Insider Blog excellently distinguishes some main attributes of the volume in a previously published article and also provides an extensive write-up of the book titled: “How the book “Inductive Sensors for Industrial Applications” helps to develop the understanding of all sensors for industrial applications” .

You can review and order the book here.

In addition to this 360 degree-view reading, in this post, the author would like to give a general overview of the functional structure of an inductive sensor in particular, as well as of miscellaneous industrial sensors like capacitive, ultrasonic, photoelectric, magnetic, microwave based, etc., and also of the complexity evolution of these kinds of sensors over the last decennia.

Fundamental Parts of a Sensor

The technical structure of a sensor can primarily be divided into two fundamental parts: the sensing element SE and the evaluation electronics EE.

Specific to the inductive sensors ISs is the fact that the SE has an inductive behavior. Th

is inductive sensing element ISE is placed in front of the sensor embodiment, sometimes called active face, and is a determining element for the sensor operation and features. General block representations, provided by professional publications [2], present the ISE as a coil (inductor) supplied with high-frequency HF current and forming the active face.

More exactly, the representation in the figure above corresponds to a contact-less proximity sensor, which can detect metal targets approaching the sensor, without physical contact with the object to be detected, namely the target. As a result, the sensor provides a final digital or analog output signal that is dependent on the target distance/position.

The coil supplied with HF-current plays a double role. Primarily, the inductor generates an HF magnetic field spread in a front-end domain of the sensor called sensing zone. When the target approaches the magnetic field, an induction current (Eddy current) flows in the target due to electromagnetic induction.

In general, the inductor performs the sensing task in parallel. As the target approaches the coil, the Eddy current flow raises and causes a higher power dissipation in the target. In turn, this effect increases the load on the electronic circuit, which supplies the coil with HF-current, namely the oscillator circuit. Accordingly, oscillation changes or stops. The sensor electronics detects this change (attenuation, frequency sweep, impedance variation, etc.) and outputs a detection signal, finally. The change is strongly dependent not only on the distance between the target and the sensing face – sensing distance/position – but also on the target properties: dimensions, material (ferromagnetic, diamagnetic), etc. These undesired influences have to be eliminated or reduced.

Two well-known companies give a blow-by-blow description of the inductive sensors inner life [3], [4]. The parts in sight are already mentioned and the operation is similar. A first coil generates an electromagnetic field that radiates out from the active face, inducing eddy currents in the target. If the sensor has an additional receiving coil, it can operate on the basis of Faraday’s Law, which means a change in the magnetic flux in a wired coil induces a voltage in a nearby coil. This voltage is the primary quantity provided by the ISE

Although ISs have been uninterruptedly produced for fifty years, year in and year out, in enormous quantities, the knowledge about their current topology is not very different from the aforementioned information. The reasons are the high number of low-performance & low-cost devices but also the confidentiality of the company knowhow. However, their complexity and intelligence have made significant improvements.

The task of the book is to raise the top cover of this field and to give the reader up-to-date information, as far as possible. For this purpose, in Chapter 7, the book author proposes a generic functional diagram (see the following figure), which should universally be valid for the very large diversity of ISs. The functional blocks and their composing electronic stages are solely defined by showing their functionality. The implementation and integration levels of this functional diagram starting with historical discrete circuitries on transistor level and ending with future-oriented software defined sensors SDS are subjects of the following Chapters, 8 to 13.

Review and order the book Inductive Sensors for Industrial Applications 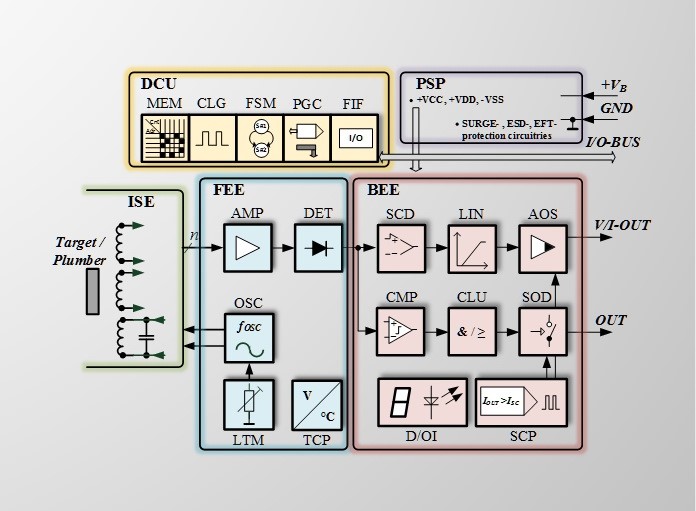 The first sensor fundamental part, namely the inductive sensing element ISE, is elaborately presented in book Chapters 4 to 6. The ISE is now figuratively depicted in the generic functional diagram by the entity of three inductors (see below). In the large majority of cases, the ISE contains a resonance circuit, which consists of the sensing coil and of a resonance capacitor, like in the generic diagram.

The second sensor part i.e. the evaluation electronics EE can essentially be divided in four basic functional units. The first, namely the front-end electronics FEE, marks the low signal and high sensitivity unit of every sensor. Furthermore, the FEE usually consists of the following electronic stages:

The Link with the external World, namely the Industrial Application, is provided by the Back-end Electronics of the Sensor

The back-end electronics BEE follows the FEE and continues the signal processing from a primary status offered by FEE to the status of sensor final output signals. To maintain the generic character, the BEE structure above contains two parallel signal paths: an analogue one and a digital one, which can coexist. However, usual sensors contain either of them.

The digital control unit DCU is an advanced functional unit, which belongs to modern, state-of-the-art IS. As a result of sensor specific constraints (low costs, limited free space inside the sensor housing, low current consumption, etc.), the DCU has a moderate extent commonly consisting of:

Due to the wide spread of the inductive proximity sensors IPSs for industrial automation applications over the last 50 years, their evaluation electronics was continuously developed and integrated on a larger and larger scale. In addition, the involved silicon foundries and also their applicants, namely the sensor manufacturers, willingly published these technological steps. Correspondingly, the evolution was partially open.

With this rich volume of information, it was possible to elaborate in the book a morphological map (Figure 7.

2), which shows the evolution steps of the EE of IPS. This morphological map begins with the lowest technological level of discrete designs and passes more phases of integration, starting with the integrated circuit IC levels, going through application specific integrated circuit ASIC levels and ending with the top level of systems-on-chip SOC.

These evolution steps preferentially refer to commercial parts, provided by silicon foundries. In addition, there is a significant number of proprietary ICs and ASICs, which were developed by sensor manufacturers at their own expense. They are exclusively used for the in-house production and are obviously confidential.

The next figure shows the layout picture of a real ASIC, which includes the entire generic diagram described above on a silicon area of above 6 square millimeters. The connections of the ASIC metal pads with the electronic periphery occur in this case by means of face-up chip on board with wire bonding connections. 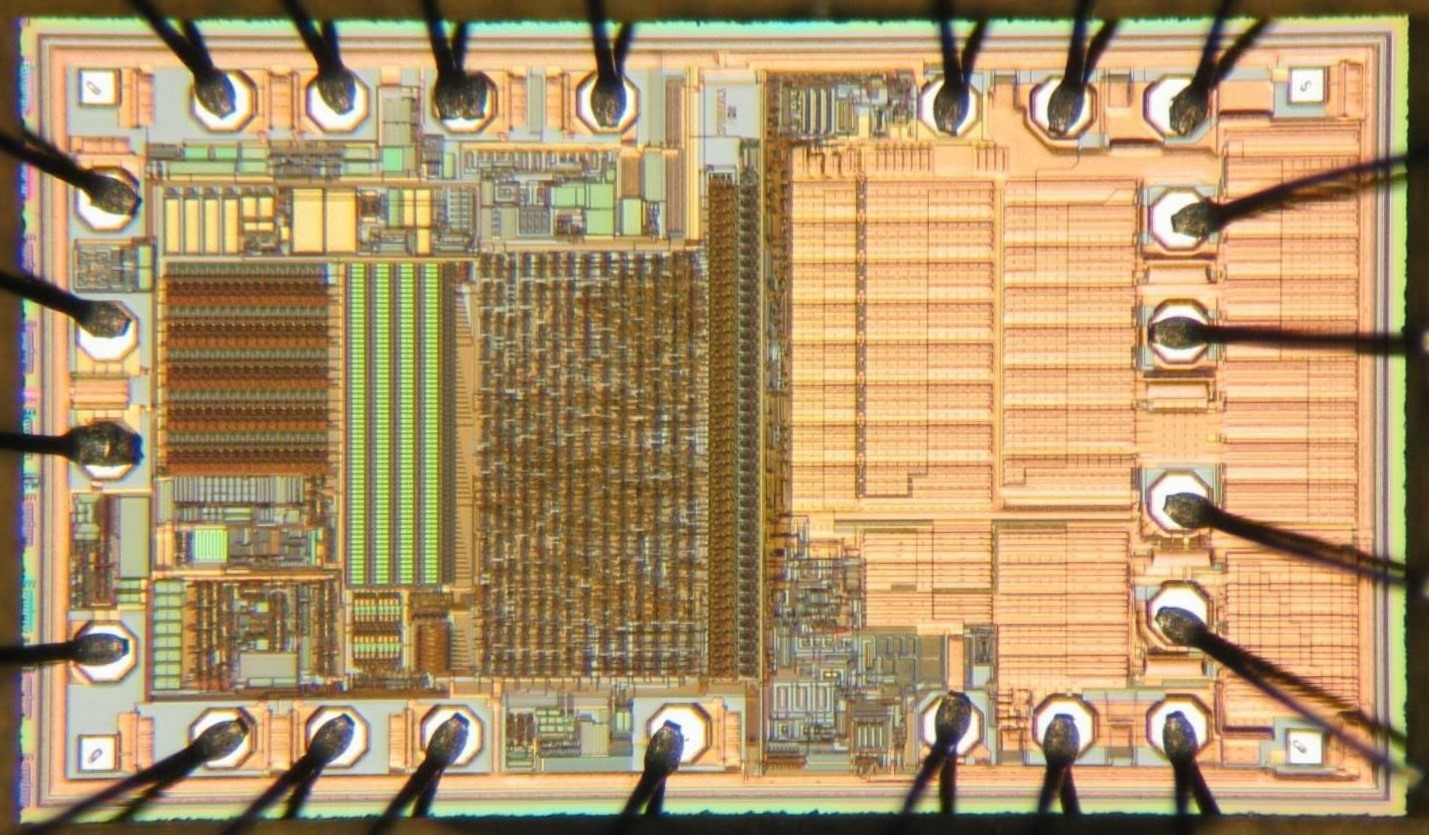 Microscope photography of the active face of a planar-integrated ASIC, fabricated in silicon by means of complementar metal-oxide CMOS technology

Making the next technological step and replacing the bonding wires by solder bumps directly attached on the ASIC pads, it was possible to implement the “flip-chip” technology [5] and to produce highly miniaturized inductive sensors with a metal housing external diameter of only 3 millimeters. 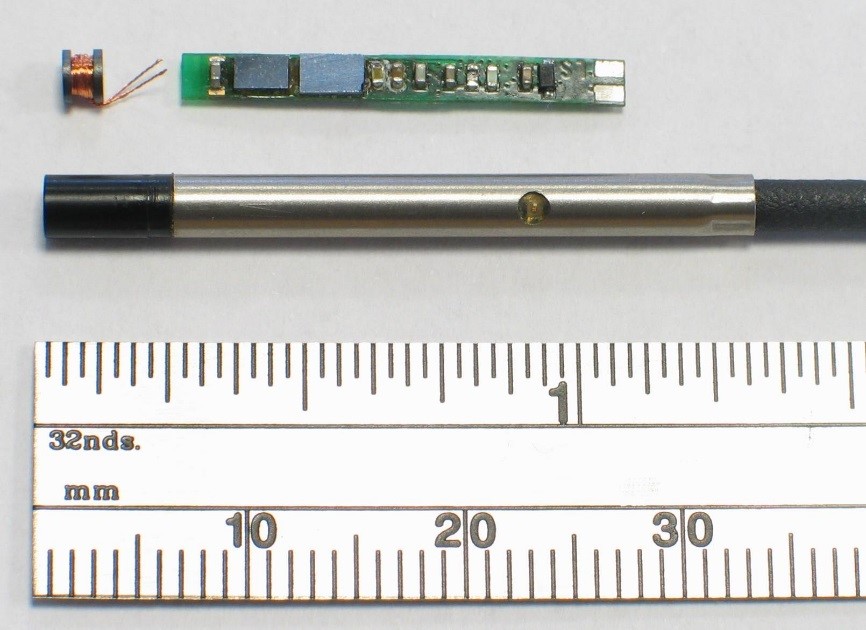 Assembled 3 mm – inductive sensor and its components (see the photo top): the ISE containing a wired coil on a drum ferrite core and the carrier FR4 board with “flip-chip” face-down attached ASICs [5]

For purchasing the book Inductive Sensors for Industrial Applications  please go to our US website  or our UK website. 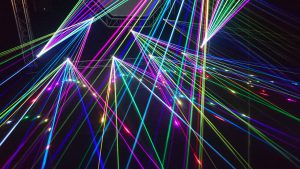 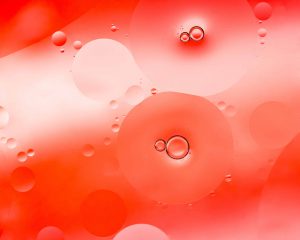